The Irrawaddy Delta – Where Land and Sea Intermingle

In 2008, this delta was widely recognized as the victim of the Cyclone Nargis, one of the most disastrous catastrophes in the region. However, with their enduring spirit, the locals have overcome all the loss and damage to rebuild their homes from dust.

The Map of the Irrawaddy Delta

The Irrawaddy Delta was formed by the accretion of the nine major tributaries of the Irrawaddy River, together with its capillary system of brooks and streams which spread all over the Delta’s area of 10,000 square kilometers. With the continuous accretion of rivers’ silt, the Delta is expanding over the sea at the speed of 5-6 kilometers in 100 years, which is an equivalent to approximately 1,000 hectares a year.

Famers are Preparing the Land for the Next Cropping Season

Originally, the Irrawaddy Delta was dominated by the Mon, they have lived there since the ancient time. Since the mid 11th century, most parts of the delta had been under the control of the Burman kingdoms. During the 13th and 15th century, and briefly in the 18th century, the Mon kingdoms took back their privileges on this land from the hands of Bamar.

The Delta was also a crucial toe-hold of the British when they started spreading their influence on Myanmar in the mid 18th century. It was the last defense line of the Burmese against the invasion of British army between the years 1824 -1826. In 1852, the British finally took control of the Irrawaddy Delta and it was merged into the British Burma. 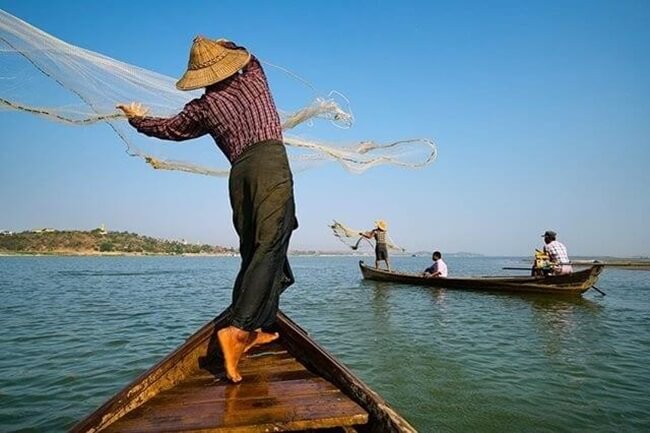 The Fishermen Just Use Simple Tools

Under the British colonial era, the authorities ordered the drainage of bogs and fens in the region and construct dyke dams and embankments to expand the cultivable land area for planting rice. In the delta, until present 1,300 kilometers of embankments has been built to protect 600,000 hectares of cropping land.

Aquatic Production Is Relatively Common in This Delta

The region is considered the largest rice bucket of Myanmar. The Burmese Government invested a huge sum in the development of road transportation and civil engineering in the Irrawaddy Delta during the late 20th century and early 21st century. About 70% of the total cultivatable land is used for planting rice with the productivity per hectare from 2,000 to 2,500 kilograms.

Fishing also plays an important role in the economy of the region. The main tools of the fishermen are small boats and fishing frames. Not surprisingly, nearly all households in the Irrawaddy delta have boats and even steamboats for those in such developing towns as Myaungmya, Bogale, and Mawlamyinegyun.

In addition, the inhabitants of the Delta also raise aquatic products and collect the eggs of sea turtle. However, these activities are currently threatened due to the decrease of mangrove forest area as people clear land for cultivating.

Since the colonial era, the life in the Irrawaddy Delta has not changed much. When cruising on such Myanmar River Cruises as Pandaw, Ananwrahta and Paukan you will have the chance to see the remnants of the era. Markets, mosques, churches, and temples are among the most noticeable and impressive sites.

Moreover, the nature in the Irrawaddy Delta is also an alluring attraction of the region. Tourists can encounter unique plants and animals, especially the Irrawaddy dolphins and migratory water birds.