The Moken – Who Can Swim before Learning How to Walk

The Moken and the Sea

The name Moken (also Mawken or Morgan) is used to refer to Austronesian groups who dwell on the coast and islands of the Andaman Sea on the west coast of Thailand (in the territory of Phuket, Ranong, Phang Nga province) and Myanmar (mainly in the Mergui Archipelago).

The majority of Moken people are nomadic hunters and gatherers whose lives depend largely on the sea. In Thailand, they are called “chao le” which means “people of the sea”. Sometimes, the Moken is referred to as “sea gypsies”, a name that is used to call several Southeast Asian ethnic groups living by the sea.

Locating in the south of the Mergui Archipelago, the Surin Islands are home to the very last Moken tribes who have led a nomadic life on the water amongst these islands, isolated from the outside world, for many centuries. The life of a Moken is attached to the sea since his/her birth. The sea nurtures them since they were born and embraces them when they breathe their last.

In their entire life, the Moken live on Kabangs, sailboats handcrafted from a single log, which serve as not only a means of transportation but also a living room, kitchen, and bedroom.

Life of the Moken Then and Now

A Moken is Teaching His Son How to Make a Roof

None can compete with the Moken in the capability of holding breath underwater and free diving. From the very young ages, they have been taught techniques and skills to live in the sea; before they make their very first steps, they have been able to swim. Knowledge of the sea is bequeathed from generation to generation, enabling them to make their living from marine plants and animals.

The fathers would train their sons to become hunters by drawing figures on the sand, showing the boys how to catch fish with simple tools like spears and nets, how to roam the sea and use plants from the rainforests to roof their Kabang. For the girls, their mother would teach them how to gather shellfish and sea cucumber in shallow waters, find crabs and sandworms on the beaches and dig for wild yams in the rainforests on islands.

Moken children have befriended the sea since they were little and made the sea their playground. 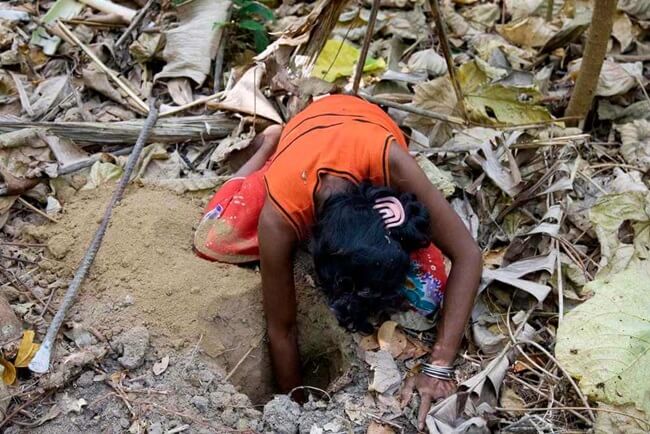 A Moken Woman is Digging Yams in the Forest

The Moken Cook Their Meals Right on Their Kabangs

The Moken people lead a very nomadic and primordial way of life. They live freely without worry and feel contented with their lives here, on their Kabangs. Surprisingly, they have no notion of month or year and they don’t know how old they are.

The Moken people have always lived an elusive life and tried to conceal themselves from the eyes of people from the outside world. However, now there is no place left for them to hide.

The nomadic life and culture of the Moken people are currently under threat because the Governments of Myanmar and Thailand want to assimilate them into their own cultures. Many Moken tribes have been forced to live in villages on islands and coastal regions.

The number of Moken people who still cling to their ancient roaming way of life has become smaller and smaller. A unique sea culture is now on the verge of disappearance, forever.

Today, if you visit the Mergui Archipelago on Myanmar Yacht Charters, you will still have the chance to encounter Moken people roaming on the sea. However, as the nomadic groups are decreasing in number, we are not sure how long can we still see this image.