The Plain-pouched Hornbill is a bird species that is under great threaten. In the world, the number of this bird’s populations has decreased sharply in recent years and that’s why the Plain-pouched Hornbill has been classified as “vulnerable” in the Red List of Threatened Species. Luckily, these birds still thrive in the Mergui Archipelago of Myanmar. We can easily see large flocks of these beautiful birds flying around the islands of this archipelago. 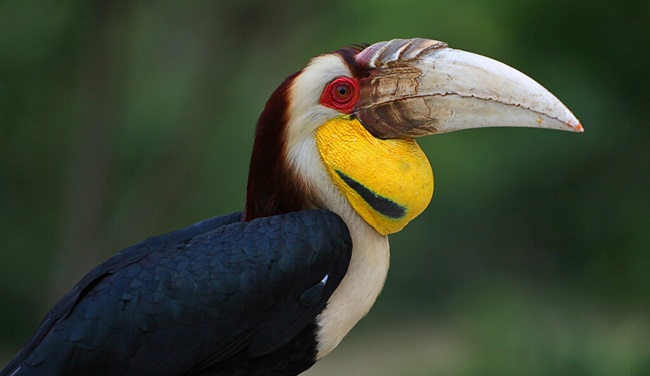 The Plain-pouched Hornbill is Now a Vulnerable Species

The Plain-pouched Hornbill used to be the hornbill species that has the largest population in the Mergui Archipelago. The main habitats of these birds are forests in and along the Tenasserim Hills which wander around the Malay Peninsula. 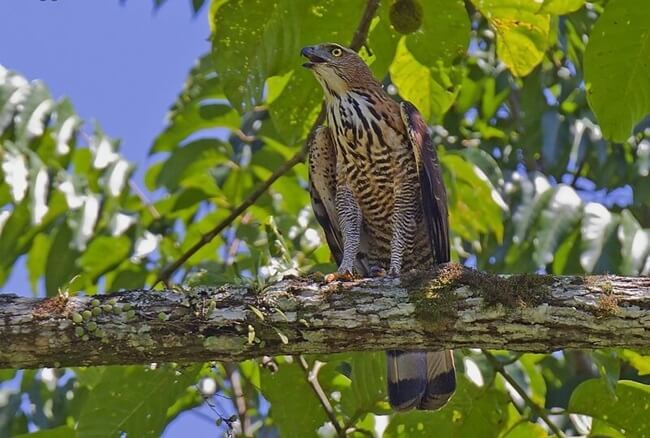 The Mergui Archipelago is home to many mighty and magnificent eagle species such as the Crested Serpent Eagle, the White-bellied Sea Eagle, and the Grey-headed Fish Eagle. However, in consideration of the uniqueness, Wallace’s Hawk-eagle would win the contest. Of all eagle species in the world, this is the smallest one. An average adult Wallace’s Hawk-eagle just has the size of a falcon, about 46 centimeters long.

Just like the Plain-pouched Hornbill, these beautiful and elegant eagles are now listed as “vulnerable” in the Red list, they are very rare now and you must be very lucky to see them.

The Crested Partridge is well recognized for its beautiful magnificent plumage. Both male and female Crested Partridge have scapulars and wings in brown, but their plumage is in totally different colors. The male body is covered by metallic dark blue feathers while that of the female is in olive-green. For their head, while the male has a red crest on their head, the female has none, their head is in slate-grey. 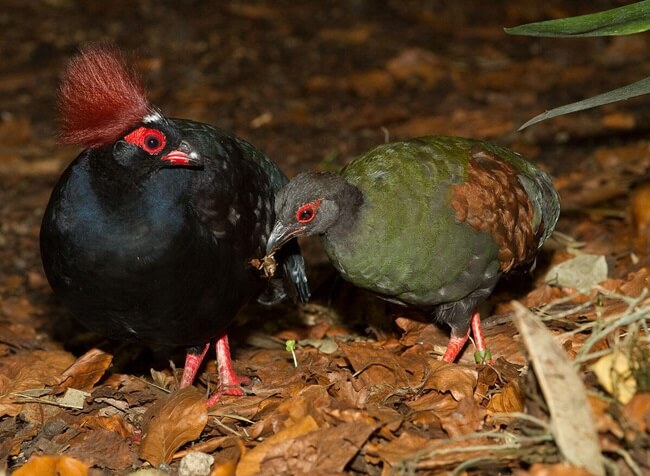 A Couple of Crested Partridge Seeking for Food in the Forest

These birds often scrape their nests on the ground and conceal them under heaps of dry leaves blending in the color forest floor. We can easily catch the sight of crested partridge, either alone or in pairs, seeking for food on the forest floor by using their feet to find fruit, seeds, and invertebrates. When detecting threats, they often run away or fly short distances if necessary.

Sunbird is actually another name to call the hummingbirds, which are tiny colorful flying creature feeding on nectar and pollen. Among 132 species of sunbird all over the world, the Red-throated Sunbird is probably the rarest one. Fortunately, those who visit the Mergui archipelago will have the chance to admire these beautiful birds, yet the chance is extremely small and you must be very lucky to catch the sight of them foraging in the forest.

You Must be Very Lucky to See Red-throated Sunbird

Little do we know about the Red-throated Sunbird, we just know that these birds often make their nests on a cord from a tree at the edge of a clearing. The nets are often positioned at the height of 9-20 meters above the ground and are made of matted plant fibers. The reproduction activity of these tiny birds just takes place once in a year.

The Brown-winged Kingfisher has the most extraordinary plumage of all kingfishers, which is an odd combination of yellow and brown. Their body is covered by yellow feathers with some blue dot on their back while their wings are in dark brown. With the length of 35 centimeters, the Brown-winged Kingfisher is categorized in the group of large birds.

Brown-winged Kingfishers are Masters in Catching Fish and Crabs

These birds often live in such coastal habitats as tidal forests, mangrove forests, estuaries, creeks, and mudflats where they can find their favorite preys – crabs and fish. The Brown-winged Kingfisher can easily be seen in many places on the Bay of Bengal, but is now listed as “near threatened” in the Red List of Endanger Species.

To admire these charming and magnificent birds, you can take a Myanmar Yacht Charter to visit the beautiful and pristine Archipelago of Mergui.